The Lord’s Resistance Army was officially designated as a terrorist organization by Colin Powell in 2001. When President Obama sent troops to help fight them, Rush Limbaugh described that as an attack on Christians. Will any Republican Presidential candidate dare to disagree with Limbaugh? Will any reporter ask one to?

Below is a photograph of one of the victims of the Lord’s Resistance Army, added by Colin Powell in December of 2001 to the official State Department list of terrorist organizations. (Here’s the BBC story including the photo.) 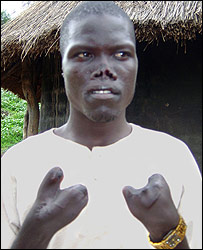 After President Obama sent 100 peacekeepers to Uganda to help get this truly loathsome crew under control, Rush Limbaugh ran the following headline:

Here’s the key paragraph from the story:

Lord’s Resistance Army are Christians. They are fighting the Muslims in Sudan. And Obama has sent troops, United States troops to remove them from the battlefield, which means kill them.

He then proceeded to recite the LRA’s own propaganda as evidence of its pure intentions. That may not constitute “material support” for the LRA under the meaning of the statute, but morally Limbaugh has innocent blood on his hands. And why? Because his lunatic listeners love the idea that Barack Obama secretly hates Christianity.

No national Republican leader would dare refuse a summons from Limbaugh to appear on his show. That’s why all the discussion of what one or another Republican actually believes is so irrelevant. They’re all the slaves of the same insane movement.

Professor of Public Policy at the NYU Marron Institute for Urban Management and editor of the Journal of Drug Policy Analysis. Teaches about the methods of policy analysis about drug abuse control and crime control policy, working out the implications of two principles: that swift and certain sanctions don't have to be severe to be effective, and that well-designed threats usually don't have to be carried out. Books: Drugs and Drug Policy: What Everyone Needs to Know (with Jonathan Caulkins and Angela Hawken) When Brute Force Fails: How to Have Less Crime and Less Punishment (Princeton, 2009; named one of the "books of the year" by The Economist Against Excess: Drug Policy for Results (Basic, 1993) Marijuana: Costs of Abuse, Costs of Control (Greenwood, 1989) UCLA Homepage Curriculum Vitae Contact: Markarkleiman-at-gmail.com View all posts by Mark Kleiman