Jason Berry, who broke the Fr. Maciel story more than a decade ago, has a bombshell account of how that polymorphously perverse sociopath bought influence and protection by spreading his money around the Vatican.

As Pope John Paul II slid into senility, and as the organization he headed slid into increasingly reactionary disarray under the control of the Ratzinger faction, it was hard to avoid noticing the parallel between John Paul and his great historical enemy, Leonid Brezhnev. Â Each would have left a sounder institution behind him if the Grim Reaper had come a decade sooner; in Brezhnev’s case at least, damage to the institution was benefit to the world.

At the end, there was even a certain physical resemblance. 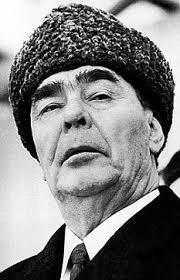 Jason Berry’s account in the National Catholic Reporter of the web of corruption spun by Fr. Maciel and his Legionaries of Christ is hair-raising. Â It appears that Fr. Maciel procured his infuence in the Curia the old-fashioned way, with envelopes full of cash. Ratzinger is the one Vatican official named in the story as having refused the money, though he must have known that many of his Curial colleagues were on the take. Â (It’s not clear that any rules were broken, because it doesn’t appear that there were any rules.) Â Others in the Curia who did take the money were responsible for giving Maciel what he most wanted: Â a constitution for his order including the Private Vows, binding each member not to criticize the founder and to report on criticism by anyone else.

After years of delay Ratzinger finally bucked the boss by starting an investigation into Maciels sexual (as opposed to financial) misdeeds; in addition to abusing young teen and pre-teen boys in his seminaries, Maciel fathered children with at least two women. Â As Pope Benedict, Ratzinger sent Maciel into retirement, though of course without providing the faithful or Fr. Maciel’s victims with any sort of accounting of his misdeeds.

Another sort of accounting may be even harder to generate. I’m deeply skeptical of financial numbers thrown around by reporters, but if the Legion really has anything like a $650 million annual budget or a $30 billion endowment, it’s going to take approximately forever to trace the flows; it’s not entirely clear whether the Vatican is in a legal position to exert control over those funds, even if it wants to.

Maciel’s American fan club included many of the most prominent supporters of the marriage of theologically rigid Catholicism with right-wing politics: Â Bill Bennett; Rick Santorum; Jeb Bush; Bill Donohue of the Catholic League;’ the late Richard John Neuhaus; Mary Ann Glendon; Thomas Monaghan, the founder of Domino’s Pizza and Ave Maria University; the producer of Mel Gibson’sÂ Passion. Penetential vows of silence, anyone? Or if they won’t stop talking, maybe our press corps can do us a favor and stop listening. Â (Apparently the scandals are already damaging the treasured John Paul/Benedict campaign to “re-Christianize” Europe, which has among its likely side-effects convincing Turkey that its future lies with Islam rather than Europe.)

If money from the Legion made its way into right-wing American politics, we’re likely never to know about it, any more than we know about exactly how John Paul funneled Church money to Solidarity. Â This wouldn’t be the first time that shady maneuvers justified at a moment of crisis and for a good cause got to be a bad organizational habit.

Professor of Public Policy at the NYU Marron Institute for Urban Management and editor of the Journal of Drug Policy Analysis. Teaches about the methods of policy analysis about drug abuse control and crime control policy, working out the implications of two principles: that swift and certain sanctions don't have to be severe to be effective, and that well-designed threats usually don't have to be carried out. Books: Drugs and Drug Policy: What Everyone Needs to Know (with Jonathan Caulkins and Angela Hawken) When Brute Force Fails: How to Have Less Crime and Less Punishment (Princeton, 2009; named one of the "books of the year" by The Economist Against Excess: Drug Policy for Results (Basic, 1993) Marijuana: Costs of Abuse, Costs of Control (Greenwood, 1989) UCLA Homepage Curriculum Vitae Contact: Markarkleiman-at-gmail.com View all posts by Mark Kleiman